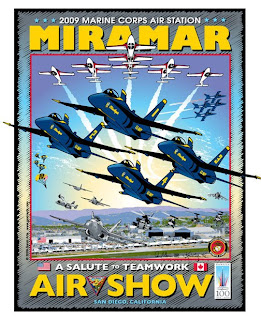 Last Saturday (has it really been a week?) we headed over to the Miramar Airshow in San Diego... we thought admission is free, seating (on the tarmac) is free, parking is free-- WHY NOT?? 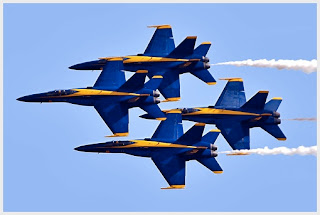 Aren't the GORGEOUS?? I'm not gonna lie-- I almost cried (blame it on the pregnancy) when they flew right over our car (because traffic was really bad-- so they ended up flying while we were waiting to park- but we still saw their AMAZING show!) Now maybe I think they are so amazing because I watched either a documentary or an IMAX about the blue angels and how you have to be the elite of the ELITE to be a Blue Angel!! And all that it takes to be one.... and MAN was it out of this WORLD! 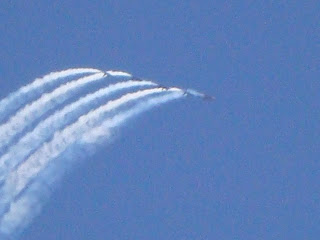 Here is my one awesome picture of the Blue Angels... saying I was actually there. Since I don't have a high tech camera to capture them in a split second-- ALL my shots turned out blurry or REALLY far away.

That was my favorite part of the whole show... and seeing how excited my kids were to get up and pretend to be pilots in these BIG macho planes, and Humvees, and don't even get me started on the weapons... Dante fell in LOVE!! 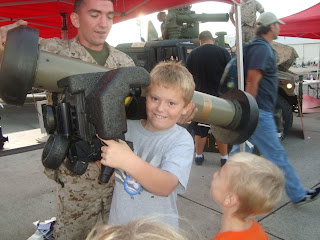 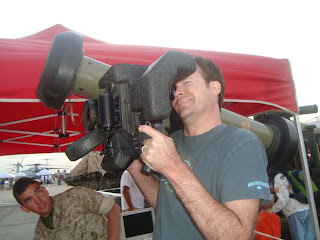 And the biggest missile of ALL was this thing-- you should have seen how POPULAR it was for "photo shoots" It was WORSE then going to see Santa the day before Christmas! 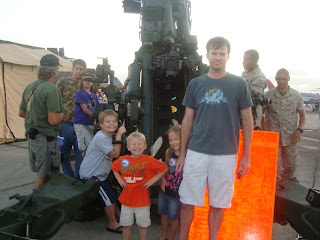 But we got one... and they were EXCITED! 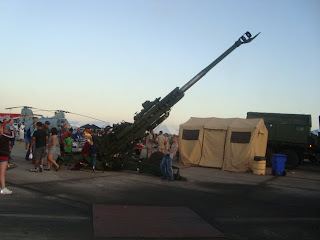 Here is the funniest picture of the day---- the dude in the picture(furthest to the right, jeans and a grey muscle tee)-- the one that is clearly leaning back and staring in awe of the "missile" ... he took his picture at least SIX different times-- it was getting so ridiculous I HAD to take a picture of him... He was also talking to the missile like the camera could here him... He would point to the picture-- lean his body back- point to the missile-- and then shout, "Dannggg" but using another word! He would have to retake it because either his cigarette made it in the picture, or he didn't think he looked good, or he wasn't close enough... I was laughing because I haven't seen anything like that! It was CRAZY! And each time, he would go, "Daaaannng!" all while pointing to the big missile. 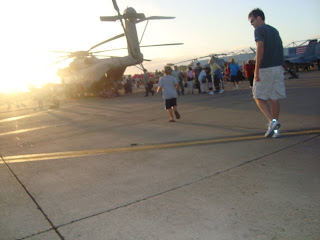 Chet running after the kids as they go from plane to helicopter to Humvee- I mean there were THOUSANDS of -you name it- for the kids to play in and explore! It was great! 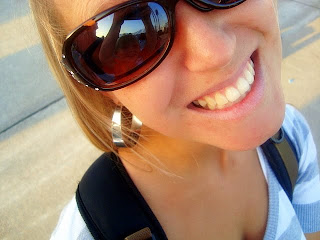 Ethan stole the camera from me and had to take a shot. He LOVES the closeups! 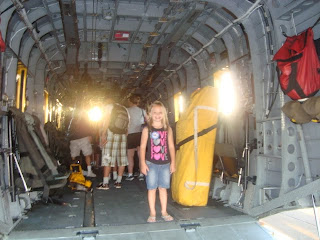 Ms. Erin in one of the planes! 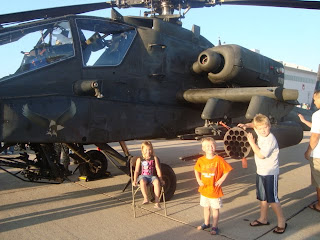 The kids in front of a wicked helicopter with cool missiles! (notice Ethan's newest pose in all pics... Hands MUST be on hips) 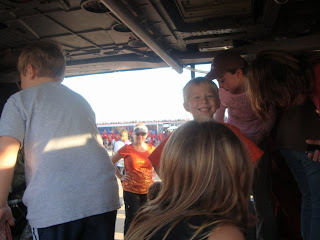 And again-- you can tell his hands are on his hips! 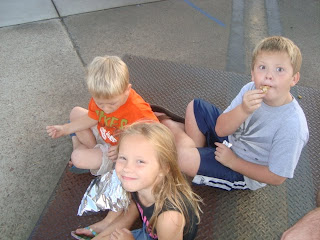 And taking a breather while the kids snack on some snacky stuff and while we watch some more of the airshow.

If you are ever in the Southern California area during the Miramar airshow- it is totally worth the trip and because it's ALL free- minus the food-- which is VERY enticing to say the least... we just tried to stay far away from the food tents-- so we wouldn't be tempted:)

Looks like a great day for the whole family. I love airshows.

Oh hay Gina. Derek and I are going to an air show on Halloween in Houston. I'm excited because I've never been before. Derek is obsessed with airplanes and knows all about them. He's seen the Blue Angels many times and can't wait for me to see them, too. He's been showing me youtube videos and telling me all about them. It's amazing how much he knows. I'm excited. What a fun thing for your family to do. Love you!