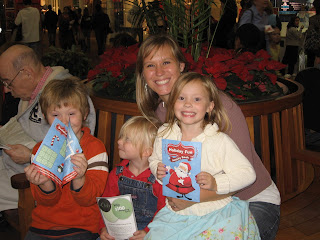 So, after Emily was all ok and Christie came home from the ER with her- we headed over to the mall to meet Santa. I was so excited- because this year.. I could finally get a picture of EVERYONE on Santa's lap and with a smile.. vs crying or mommy in the picture too. We get there, and Santa won't be back for another 20 min. However, they conveniently put Santa's North Pole right across from the mall's toy store... so we just walked into the toy store and hung out there for a while, so my kids could figure out what they were going to tell Santa what they wanted for Christmas! I see a line start to build up - so I quickly grab my kids and get in line. As we are inching closer and closer- Erin starting freaking out. Ethan and Dante were great! Erin though, would not let go of me and she started crying and was like- mom- I just don't want to see him. I tried bribing her, I said we can't go to Cinderella's party at Chick-fil-a if you don't sit on his lap... or he won't get you anything for Chistmas if you don't tell him what you want- and he won't know you live at our house, or I'll buy you a polly pocket if you sit on his lap, or anything in that toystore. None of this seemed to work. So, we move closer and it normally doesn't help when the kid in front of you is crying too- but the kid was really only 2 - not FIVE!! So, then it is our turn... so I rush Dante and Ethan to Santa, and that is where Ethan grabs for Christie and won't even LOOK at Santa! I'm trying to pry Erin off of me- but she is stuck to me like a monkey to a tree-- and unless I want serious scratches all over me-- then I better let it be. So- here is the picture I got. Dante went up and told Santa exactly what he wanted.... and then Santa decided it would be a good idea to ask Dante if there was anything else he wanted... to which Dante replied- EVERYTHING IN THAT TOY STORE RIGHT THERE! Oh boy! How is Santa ever going to fulfill that Christmas list? 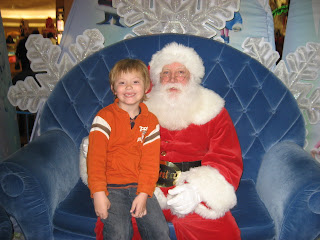