I LOVE STORIES!! Today for some reason- I have been thinking a lot about my kids and how quickly you forget some of the "hard" things you have had to go through as time moves on, and different "hard" things come along.

In a recent book I read, "How to Raise Motivated Kids", there was a chapter on Story telling and that stories (especially from your own child hood and about the child's earlier days) are great motivators and that kids love them! So, I thought- I'll just drop a few stories about each of my kids- that I will always remember! 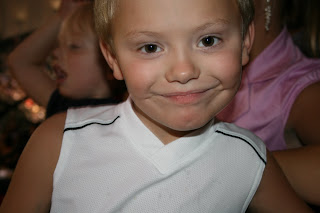 Dante was the greatest baby ever! He never cried- and I'm DEAD serious! He NEVER cried! If he wanted something as a baby- all you would hear is a squeek.... then if you didn't come, he would squeek again... it was the funniest thing ever! The most trying thing that I experienced with Dante when he was a tot- was his throwing up! He did it ALL the time. And maybe this is because he didn't know what "crying" was when he was a baby- but he would throw up- if he cried. It didn't matter how soft or hard he cried- if he cried he would throw up. Then it got to the point, where he would fall asleep somewhere, and if I picked him up to carry him to his bed- he would throw up. Every night for I have no idea HOW long- I was in the bath with him, cleaning him and me up.... You would think I would have learned - but I didn't! And - I guess it has all paid off... because he still throws up occasionally when not sick-- just randomly -- like tonight for instance... Ethan runs in and is like- mommy- Dante is throwing up.... and my reaction to this now is- ok, thanks for letting me know (continue doing whatever I'm doing) He is an AWESOME thrower upper- and he won't come whining to me, he'll clean up himself... he'll wipe his mouth off, and go right back to playing- or sleeping- or whatever. It's great! It is just part of his life- and Drs. say he is fine. So- go head Dante!:) Another thing- that cracked me up the other day... I was dropping them all off at the gym daycare and the lady always has to ask where you will be- upstairs, in a class, the pool... just so she can come get you, if you don't hear your name over the intercom. Well, she asks this- and Dante immediatley looks at her- and goes- UPSTAIRS! You should know that- mom is ALWAYS upstairs! And she starts laughing and Dante starts laughing- it was so funny! 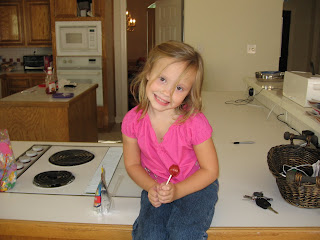 Erin has always been a mommy's little girl- which is nice- as Dante is a TOTAL daddy's boy! The one thing- that to this day still confuses me about Erin.... is when she started talking- she had this one word... that I never could figure out.... "bonum". She would say this word ALL the time... and she did it in an asking way.... so I'd always start saying a bunch of words back to her, that I thought it sounded like- or could possibly be, and I always got a no.. no...no..... But- if I said "bonum" back to her- just like she said it to me- she would say Yes- Bonum!! Does anyone else know what that is?? Bonum?? It was so frustrating- because she wanted it quite often- and I could NEVER give it to her- because I did not know what it was. She never cried if she didn't get it- so maybe it wasn't anything materialistic... Who knows... but it still cracks me up to this day when ever I think of that word. Erin's new thing lately is unlocking doors! I can't believe she already knows this... but we have the type of locks that you just have to put like a toothpick in or whatever and it opens. We usually will take a part a pen and use that.. Erin now will do this. At night- when we are sleeping, I lock the door, so that if the kids try to get in bed with us- I can take them back to their own bed... because usually I won't notice when they come and get in bed with us- and at 5 AM I'm like- why is it so uncomfy.. and then I'm like- oh- all 3 kids got in bed with us somehow. Now - Erin has taken apart almost every pen she finds and unlocks our door at night- or when I'm trying to nap or when I'm trying to take a breather... etc.... I thought I had gotten them all away from her- when I forgot that - I usually keep them above the each door frame that has a lock, so that if one of my kids locks the door- I can just reach up and unlock the door vs. having to go look for something to unlock it with.... well- once again at 5 AM all kids are in bed- and I walk outside my door- and I see a table chair, and a few other things on top of the table chair- so that Erin could reach up and get the pen down from the door frame and unlock the door. She is just too clever- and if there is something she wants-- she will get it! 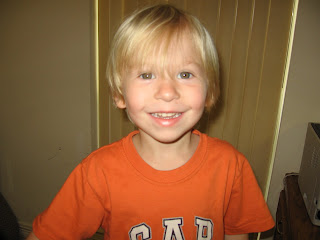 Now, Ethan is a WHOLE new breed to me! He is just not normal. If any of you have seen that Tyler Wilkinson movie where he is a football player in St. George and he ends up breaking his neck... well- the part in the movie where it shows him as a little kid- that is TOTALLY ETHAN to a T! This kid is CRAZY! At 18 months he was jumping off our bar onto the carpet- he'll scale up one side of a doorway like he is a bear climbing a tree. He used to crawl like Moglee- and I think it honestly has just stuck with him! But - the craziest thing Ethan has EVER done- which also proves to me- that Angels are watching him around the clock- and they probably even have like 15 on him at one time, and they go in shifts, is walking to my house from Grandmas house- all by himself when he was 2. So- my parents only live .33 miles away in driving distance- so we walk over there quite regularly and the kids will ride their bikes. But- I never thought that they if I said- ok- go to Grandmas' that they would be able to find it on their own... Dante- maybe! - But Ethan- not in a MILLION years! We don't live on the same block- I'm in the next subdivision over. So, if you are coming out from where my mom lives- you also have to cross over a man made lake- and you are out on a pretty busy street too. Then you just take the 1st right into my neighborhood and my house is the 1st one on the corner. So, it's not complicated to say the least- but the lake is the biggest shock.

Back to the story- Ethan spent the night at my moms house with my younger sister... my mom was actually in Dallas with Amy while she had her baby. Saturday morning at about 10:00 I hear the doorbell like 1 million times, and I just figure it is my sister who is dropping off Ethan, because she wants to go back to bed, and he won't let her. Well, I go to the door- and I see Ethan, and 2 police officers. To Ethan, I say, did you just get dropped off? and I'm looking for my sisters car... and I don't see it. Then the officer comes up to me, and is like- is this your child? I'm like- yes- this is Ethan... and they were like- he was outside all by himself and when we tried to approach him at the lake- he took off running and came right here and starting ringing your doorbell ( he outran the cops!) This kid is crazy fast! So, I'm like- oh my goodness! They were like we will need to see your ID, then they were like- did you know he was out by himself? I was like- no- he was spending the night over at my moms house- just a block away with my sister. Then they got my sister on the phone and had to verify the story and when my sister checked all the doors- they were still locked, and it turns out- he escaped through the doggy door. Dixie's doggy door- who is a miniature dauchsund- so it was a small doggy door... and Dixie had followed Ethan the whole way to my house. It was crazy! I wasn't mad at all, because I know mistakes happened and who would have thought he would escape through the doggy door? I was just amazingly greatful that it ended the way it did. My sister felt a whole lot worse then I did-- poor girl! Anyhow- as I am typing this- Ethan is running around the house doing the "superman arms" and being a super hero- and pretending he is flying all the while shouting... "I'm SUPER COO-COO!!" I could not have picked out a more perfect superhero name for him myself!

Your kids sound great and I think your Ethan and my Josh would be best buddies. They sound identical!!

Bertie, Katie called me this morning and told me I had to read your blog because of the story about Ethan outrunning the cops. We were laughing on the phone together about it, but then I laughed even harder when I read that he escaped through the dog door!! Katie left that part out. Ahh.. it cracks me up.